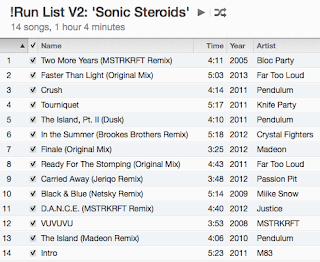 When people ask me why I run, my response is always the same: 'it's how I get my kicks'. However, this is only half of the story. Whilst the act of running alone gives me a rush that only an exercise-induced endorphin rush can provide, my running regimen would be an unimaginably more tedious and often repellent pastime without music. From a personal perspective, the pure rush I get from performing an extraordinarily repetitive motion with my legs and feet for sometimes tens of miles on end, is a dish  best served with a side of steaming sonic soup.

To illustrate the difference between running with and without music, it's perhaps easiest to consider the contrast between shaving with a razor and using a potato peeler, or digging into to a piping hot lasagne with a knife and fork and using your hands. You'll still get the job done (if you ignore the grievous bodily harm) and the lasagne's going to taste delicious either way, but you're probably going to have a better time if you invest in a shaver and some cutlery. And it's the same with running - I'll get a kick out of it no matter what, but I'll enjoy it exponentially more (and be far less anxious about being labelled as some sort of un-evolved Neanderthal) if I've cooked up a red-hot playlist beforehand.

Of course there are runners and athletes who would not just beg but demand to differ, claiming that  there is no experience tantamount to the sensation of running o'natural with only the tempo of your own footfall, the rush of air in your face, and soundtrack of the landscape around you for company. And from an athletic standpoint, this perhaps makes sense: it's certainly a valid argument that listening to the sound of your own breathing and the impact of your feet with the ground will help you to keep in touch with how your body is doing, and granted we haven't yet reached an age where Olympians faff about with their ear buds before the starting pistol.

As a purely hedonistic, self-serving endorphin junky however, there will never be a calf-characterised preoccupation that compares to the unadulterated thrill of hurtling along at what feels like stupid-miles-per-hour with Netsky or Far Too Loud eroding my ear drums. Which leads me to another point: the sort of songs and artists I listen to for motivational purposes are arguably not of the same variety as those I'd choose to indulge in for their musical merit alone. As this blog hopefully reflects, I enjoy a range of musical flavours, but I still rarely find myself writing about the latest EDM or D&B releases (to the point that I had to Google 'EDM' to make sure I had understood the acronym correctly, it's simply 'Electronic Dance Music', by the way). When I hit the road for a run however, it's music of the fast-paced, spectacularly bass-heavy, and absurdly electronic variety that makes up my go-to playlists.

But it's the science behind the concept of music as a stimulating drug that makes it truly intriguing. In study of tri-athletes, sports psychologists from Brunel University and the University of Southern Queensland suggested that 'when athletes are played loud, upbeat music' the increased activity in the reticular activating system of the brain could be responsible for up to 15% increase in the endurance of athletes. In the context of the increasingly popular 5km run, for example, this could mean a runner listening to music could feel capable of running up to some 750 metres further than if they were running with the sound of their surroundings alone.

So next time you're out for a cycle, walk or run, or are simply late for the bus or simple, don't underestimate the power of the playlist.
Posted by Jamie at 12:48